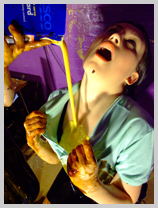 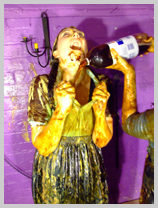 Before a new uniform can be released to the young ladies of the finishing school, it must be thoroughly tested. And so Lady Rose and Veronica Ravenblack don the standard and sports versions of the proposed latest style, and give each other the full treatment, role-playing the strict games mistress giving an unruly student a dressing down (not to mention drenching down!) in the process!

To start off, Lady Rose makes up a nice messy seat for Veronica, then orders her to pull up her games skirt, showing her pristine black swimsuit, and sit herself down in the mess. Squelch! Veronica will have a sticky squelchy bottom for the rest of the session. Her games skirt doesn't escape either, once dropped back into position the mess from her swimsuit's bum starts to seep through the fabric. And then Rose pours treacle into Veronica's lap.

Fair is fair, so Rose now submits to Veronica, and is given a nice messy gateaux, topped off with syrup, to sit in herself. So much for her smart blue uniform skirt - squelch! - and she also has a nice sticky bum. Rose remains seated while Veronica pours more syrup all over the front of Rose's skirt till it pours off the hem and all over her black plimsoles.

Veronica's shoes and socks are the next to get the treatment, lots of syrup and treacle, and then both socks filled with custard, and then Rose sits down again and has her plimsoles liberally coated with strawberry getaux.

Next Rose has her blouse filled, custard and treacle poured liberally inside, after which it's Veronica's turn for the same treatment of her polo shirt.

Now the girls have thoroughly tested each other's uniforms, but that's not quite enough - so they give each other very messy shampoos too! Veronica goes first, and then once her hair's been thoroughly drenched in mess it's Rose's turn, her long curly hair completely drenched in custard and treacle.

And after that, the two of them empty several bottles of cola down each other's already gunge-drenched clothes, before finally sitting down in the pool of mixed mess on the floor, still fully dressed.