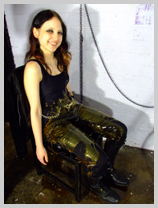 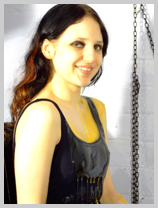 The Rocker and the 80s chick

There are old traditions up here. Gone from the cities now, in our modern world of shopping by convenience and try before you buy, but it was not always so. Once, the wealthy would attend the great boutique stores of the imperial cities, palaces of hushed deference and polite obseqiance, where the lords and ladies of the great houses would sit and the staff would fetch the things they thought appropriate for their exalted clientale, and though the servility might have appeared to be one-way, in a way the customers were as tradition bound as the servers, only ever being shown what the merchants thought suitable for their status.

Rituals and manners developed around this formality, including some distinctly odd ones. A great lady would sit in the seat provided for her, regardless of whether there was a tray of custard placed to receive her richly-clad bottom. Various pourables would be demonstrated on a lady's own costume, and she might in turn try her selections out on the shop assistants' uniforms too.

All this is now history of course, but as proud keepers of ancient traditions, the folk of the Hall re-enact some of them from time to time, sometimes in authentic period wear, sometimes in more modern atire, re-creating the recent past as it might have been had the traditions endured.

And so it was that one fine morning saw Miss Pink in the role of a 1980s high-fashion store assistant, and Felicity, dressed in rock-chick-chic, take to the dungeon to imagine how shopping for pourables might have been had the old ways remained in use!

Both girls end up with their outfits thoroughly drenched in gunge, and then take a long hosedown together, during which Miss Pink stips down to just her swimsuit and boots!