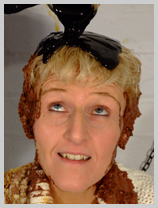 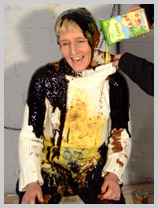 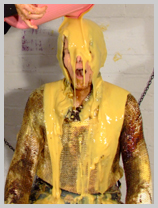 No trespassing on Lady Jasmine's land!

Oh dear! Tilly's been caught trespassing in the grounds of Saturation Hall again, and really needs to be soundly dealt with. Though you might think, given how ineffective she was at hiding when spotted - she claimed that waving her arms about was intended to disguise herself as an ornamental Yahoo Bird, a claim that might have been a tad more believable had not the last breeding pair of Yahoo Birds on the estate been wiped out in the fell winter of 1708, just over three hundred years ago - that she actually wanted to be caught and gunged! But nevertheless when we cornered her in the water gardens she gave herself up gracefully and said she would "take her punishment like a lady, and not resist whatever we might do to her".

So Nurse Wendy, dressed in a nice protective black boilersuit, sets to work to give her a sound gunging for her misdemeanour.

Milk down the trousers comes first, an entire three litre bottle poured in, flowing down both legs and wetting her shoes as it flows out.

Custard down the jumper quickly follows, poured in at the neck and flowing out through the knit to drip onto Tilly's milk-damp trousers.

Cake sitting soon follows that, as Tilly's still-clean bottom is firmly pressed into a nice gooey chocolate gateaux, she's made to stand so we can see the messy results spread across the seat of her trousers, and is then sat down again in the mess.

Sticky cakes to the head come next, a cake sandwich and pies, and then a black treacle shampoo! And then lots and lots of gunge pouring, more jumper filling, and once her front is well covered, she's made to lie face-down on the messy floor while her still-clean back is given the full treatment too. We don't leave anyone half-gunged at the Hall!

The gungings continue, Nurse Wendy delighting in her work, until Tilly is a saturated, stick, soggy mess from head to toe. There's even a bucket of custard over the head at one point!

Punishment has been delivered! Now, will that teach her the messy fate that comes to any who disturb our ladyship's tranquility? Ornamental Yahoo bird indeed! :-)